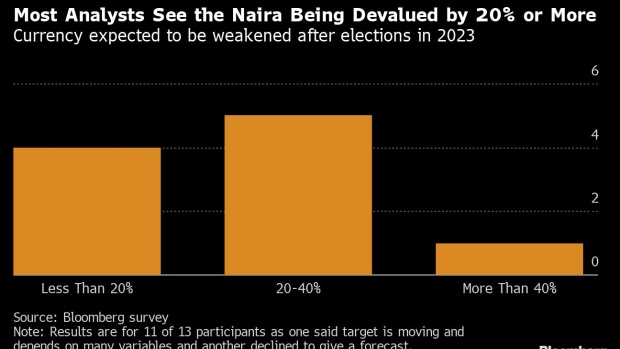 A vendor counts out Nigerian naira banknotes inside a shop at the Ikeja computer village market in Lagos, Nigeria, on Monday, March 29, 2021. Nigerians are having to contend with the highest inflation rate in four years, the second-highest unemployment rate on a list of 82 countries tracked by Bloomberg, and an economy that’s only just emerged from recession. Photographer: Adetona Omokanye/Bloomberg , Bloomberg

(Bloomberg) -- Africa’s largest economy is expected to devalue its currency after elections in February by the steepest margin in six years to align it with market perceptions, according to a survey of investors and analysts.

Nigeria operates a multiple exchange regime dominated by a tightly controlled official rate, cutting off access to many businesses and individuals, which in turn drives demand to the unauthorized black market. This has led the spread between the managed and parallel markets to significantly widen. The difference is almost 77%.

Of the 13 participants in the Bloomberg poll, 11 expect the Central Bank of Nigeria to devalue the naira after the election. The remaining two predict it will continue with a gradual depreciation of the currency that started with the adoption of the more flexible NAFEX, also known as the investors and exporters exchange rate, last year.

“There will be a major devaluation either on President Muhammadu Buhari’s way out or in the first few months of the new administration,” Ikemesit Effiong, head of research at SBM Intelligence in Lagos, the nation’s commercial hub, said in an emailed response to questions.

Nigeria adopted a multiple exchange-rate regime to avoid an outright devaluation of the naira by keeping a stronger pegged rate for official transactions and weaker exchange for non-government related transactions. The central bank has maintained the currency management system despite entreaties from the International Monetary Fund and the World Bank to scrap the practice.

Last year, the central bank devalued the currency by 7.6% in a move toward a single exchange-rate system.

The median estimate is for the next devaluation to weaken the currency by as much as a fifth, that would take the naira to 533 per dollar. Last month, Bank of America Corp. Economist Tatonga Rusike gave a similar prediction. The median of 10 participants in the Bloomberg poll sees the fair value of the local unit at 583 per dollar.

Naira forward contracts are pricing in a depreciation of about one third over the next year. A markdown between 20% and 33% would be the largest since 2016. The naira has weakened 4.5% against the greenback this year.

A devaluation would likely push up annual inflation that’s at a 17-year high of 21.1% -- although it’s already been impacted by the weaker black-market rate -- and cause a one-off increase in the ratio of public debt to gross domestic product, said Mark Bohlund, senior credit research analyst at REDD Intelligence. Debt-service costs consumed 83% of government revenue in the eight months through August, according to the budget office.

“More materially, the fiscal balance would improve due to the majority of revenue, that is from oil, being dollar-denominated, while expenditure is naira-denominated,” Bohlund said. Africa’s second-largest crude producer relies on oil and gas for about 90% of its export revenue.

The scale of the devaluation may be influenced by who wins the presidential vote, said Daniel Sodimu, sub-Saharan Africa analyst at FrontierView, who estimates the naira’s fair value at 650 against the dollar.

“If a pro-business leader wins the election, then it is likely a devaluation would be sizable enough to make Nigeria’s economy smaller than South Africa’s, using the official rate to convert,” Sodimu said. Such a move would help stop the shortage and rationing of dollars, which have been a drag on business operations in the country and an overall disincentive to invest in Nigeria, he said.

An incumbent party retaining power may see modest changes such as “the current crawling adjustments to the exchange rate will remain, so it will keep Nigeria as the largest economy, on paper,” Sodimu said.

The naira traded at 443.99 to the dollar in the official spot market as of 6.45 p.m. local time on Tuesday. It changed hands at about 785 in the parallel market, according to Abubakar Mohammed, operator of a bureau de change that tracks the data in Lagos.